Well before the new FAW-VW T-Roc was launched in China, it was clear what the audience had to expect from the event: an augmented reality show. The concept had been communicated to the press, the web and the local dealership. So, the pressure was on when German agency AV Active was commissioned to put the promise into reality with only four weeks of preparation time. Luckily, they had Ventuz in store to help them out.

The concept was pretty clear from the beginning: A T-Roc was to be driven on stage and placed onto a rotating platform. Four cameras filmed the car from different angles, and their feeds were displayed on the large LED wall on stage as well as in the broadcast feed. AV Active then had to create overlay graphics that enhanced the filmed image and automatically adjusted to the rotation of the car, thereby mixing the filmed and the virtual reality into one smooth experience. What sounds like a pretty straightforward task, was not quite as easy in real life.

“The biggest challenge was the time”, said Benjamin Brostian, CEO of AV Active. “We got involved only four weeks before the event, which meant we had to quickly start preparing the content before flying to China and setting everything up. With Ventuz, we were able to design the graphics and simultaneously prepare the playout logic, which allowed us to work very fast.”

The team started with a 3D model of the VW T-Roc. Since driver assistance systems, connected mobility, and safety systems were the central novelties of this model, the team concentrated on highlighting these aspects by adding 3D elements to the interior of the car or placing it in a traffic environment to visualize its behavior. A modular project structure allowed for ultimate flexibility because as usual, some aspects needed to be adapted during the creation process.

“When it comes to design, the Chinese market likes elaborate graphics”, said Benjamin. “We made heavy use of the new effects and motion graphics toolkit in Ventuz X. It allowed us to create stunning content but also gave us enough flexibility to easily change the look if the client required it. The ability to generate a real-time particle system, comp your scene, and program your logic in one workflow is what really sets Ventuz apart from any other tool I know.”

Faced with the size of the project and the short timeframe, AV Active decided to build an additional team of well-versed freelancers to help them with the workload. “Our in-house team is growing all the time, but in a project of this size and the short timeframe, you need assistance”, said Benjamin. “We trust in long-term partnerships with our freelancers because we work hand in hand. The Ventuz community in Germany is great and has some very fine specialists to offer. When working under such time pressure and under challenging circumstances on site, work ethics and commitment of the team are one of the most important things – and with our team, that was incredibly great!” Among these freelancers were Sebastian Spiegl and Thomas Heinrich, who were featured in the Ask the Artists Interview Series. Read their interviews here and here.

Two weeks before the event, the German team – in-house and freelancers alike – traveled to China for setup. What they didn’t know was that it was typhoon season in southern China. Heavy rains had delayed the construction of the outdoor event location, and time became even more of a challenge. Two more days were lost, but finally AV Active was able to install tracking, cameras, and synchronization.

“We relied on the internal AR workflow in Ventuz and developed a custom script for tracking”, explained Benjamin. “We placed four small tracking markers on the roof of the car. The cameras then filmed the car and the resulting image was brought into our tracking servers, which detected the markers and forwarded the information to the Ventuz machine. There, the content was automatically adjusted accordingly – in size, angle, tilt, scaling and movement. All we had to do was delete the digital 3D model of the T-Roc from our content, and the final image showed our graphics with the filmed image of the car.”

But of course, it wasn’t enough to simply rotate the car in one direction at an even speed. Instead, AV Active gave suggestions on when to move the car to which position, and finally, it was decided to operate the turning platform out of Ventuz. A custom script was written and implemented into the system, triggers were placed and finally, the show could commence.

The two-day launch event of the VW T-Roc was well received by press and dealers alike. Both Chinese and German VW representatives applauded the AR experience and were more than satisfied with the team’s good work. And what does the future hold? AV Active and Burmester Event und Medientechnik are constantly looking to hire young Ventuz and 3D talents. In the wake of the AR and VR boom, they have founded a new company, Weird Reality (www.weird-reality.de), which develops immersive installations and prototypes for the professional B2B market. So, if you want to dive deeper into augmented and virtual reality, give them a call. 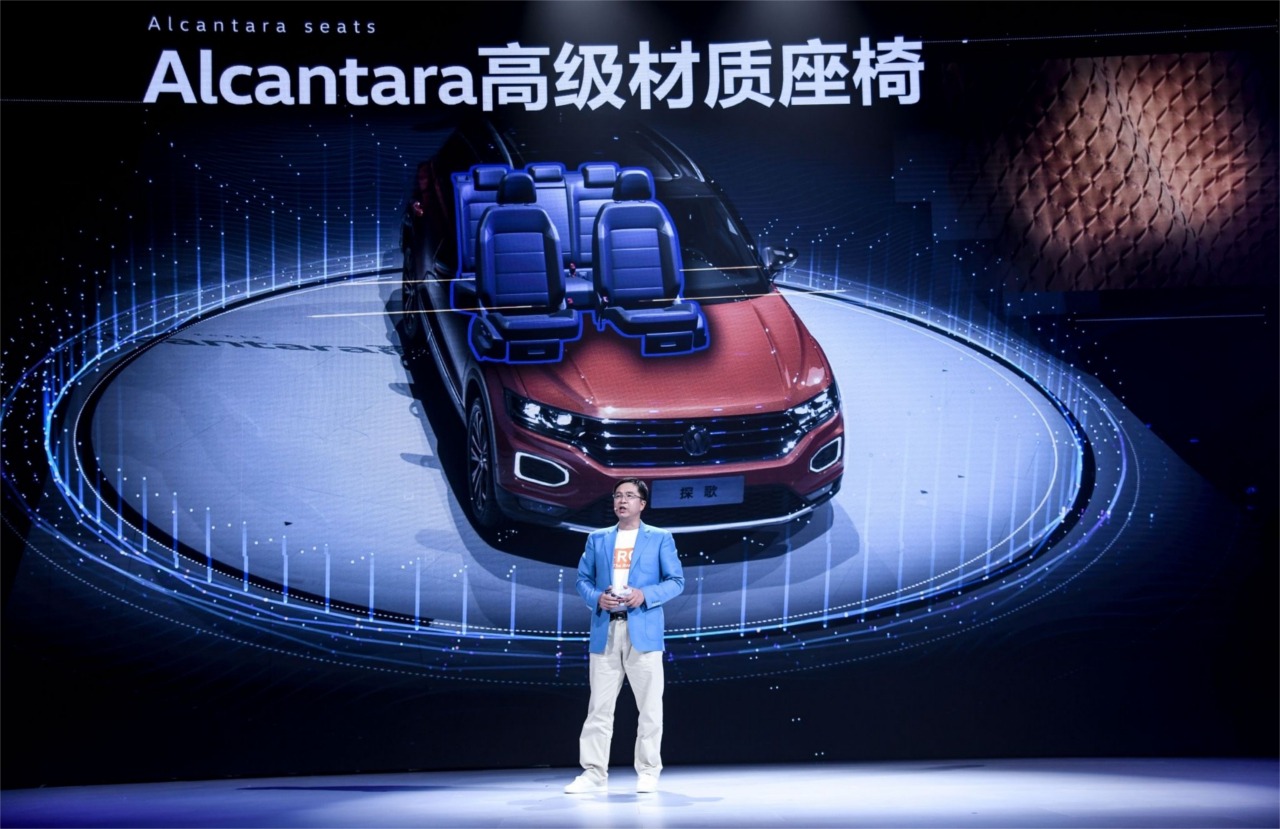 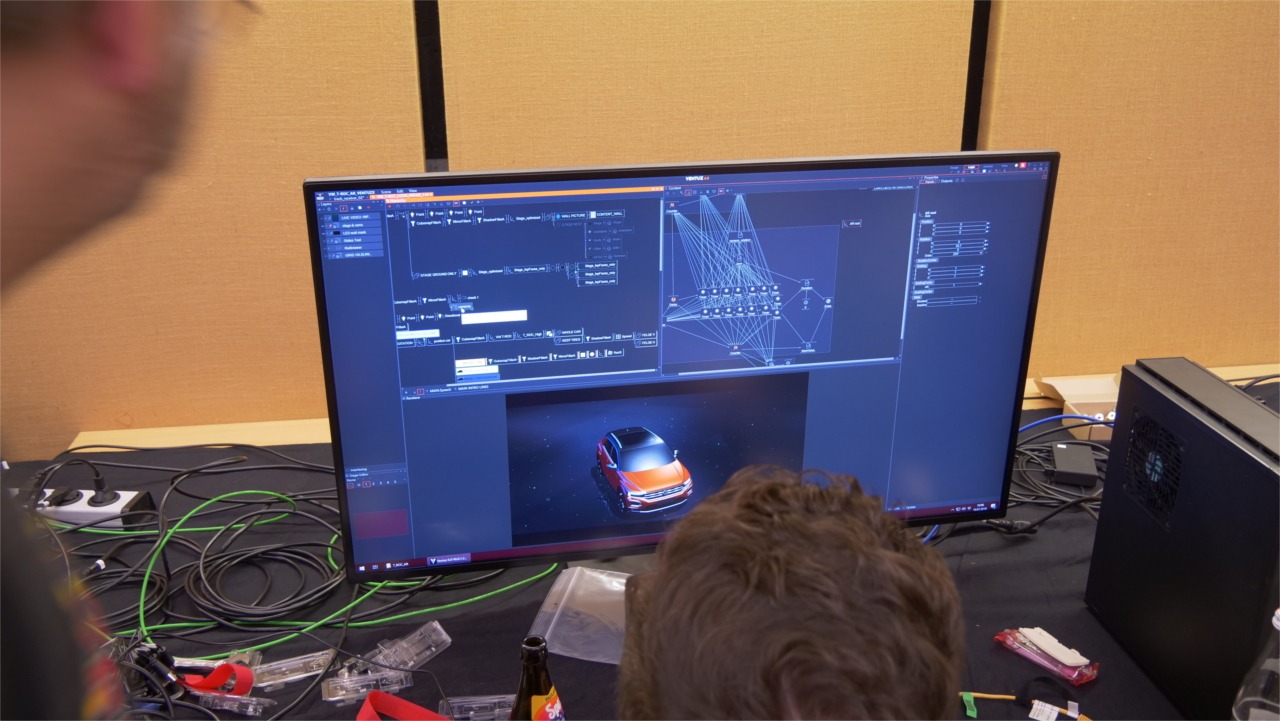 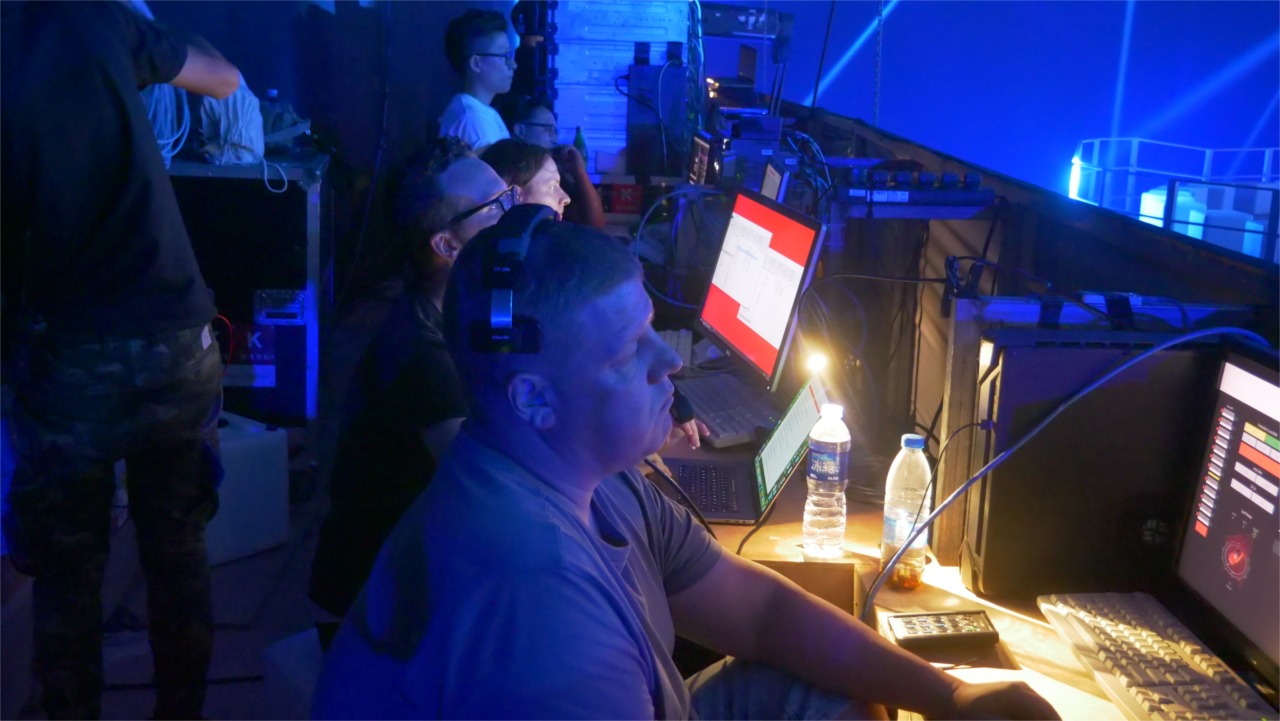 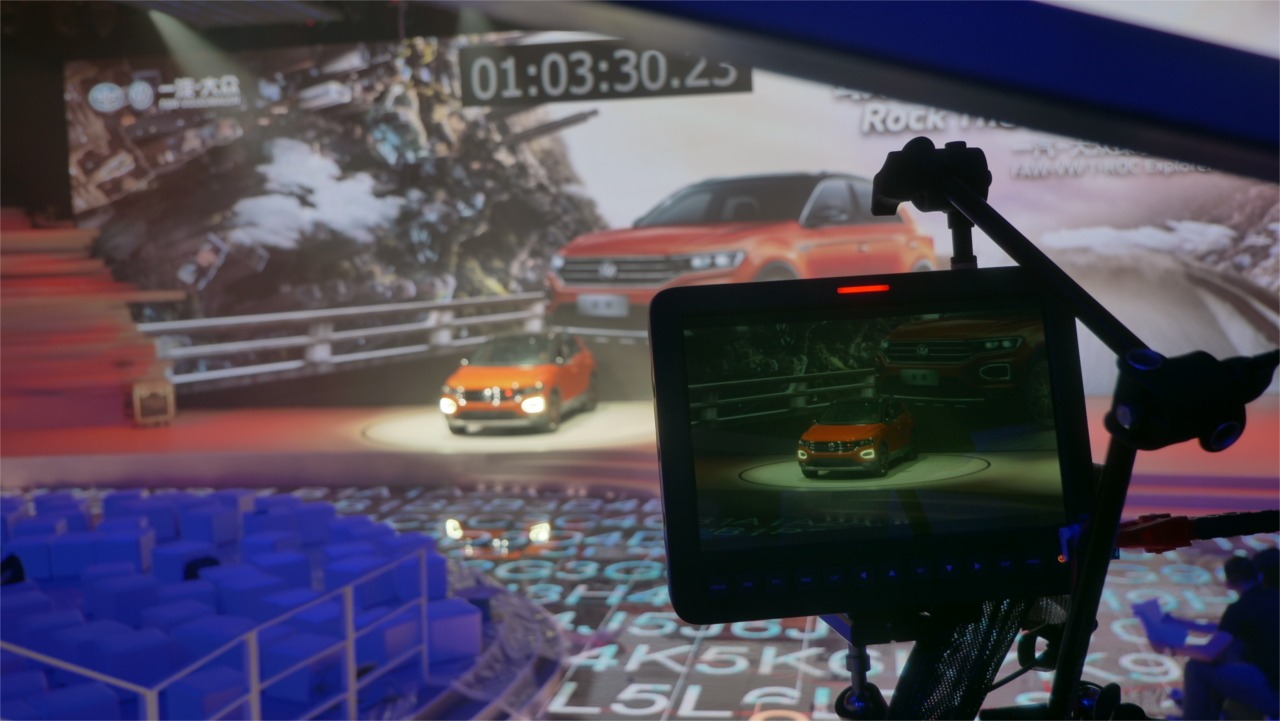 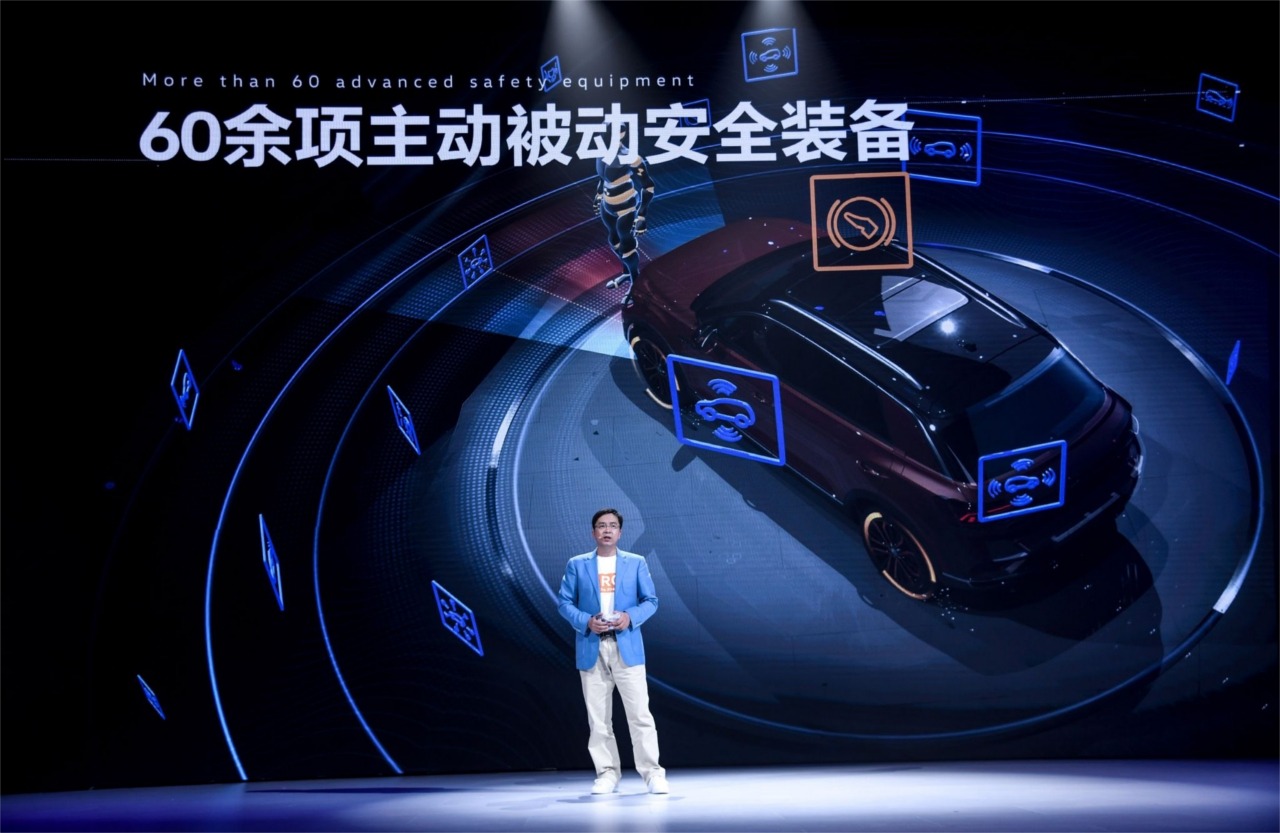 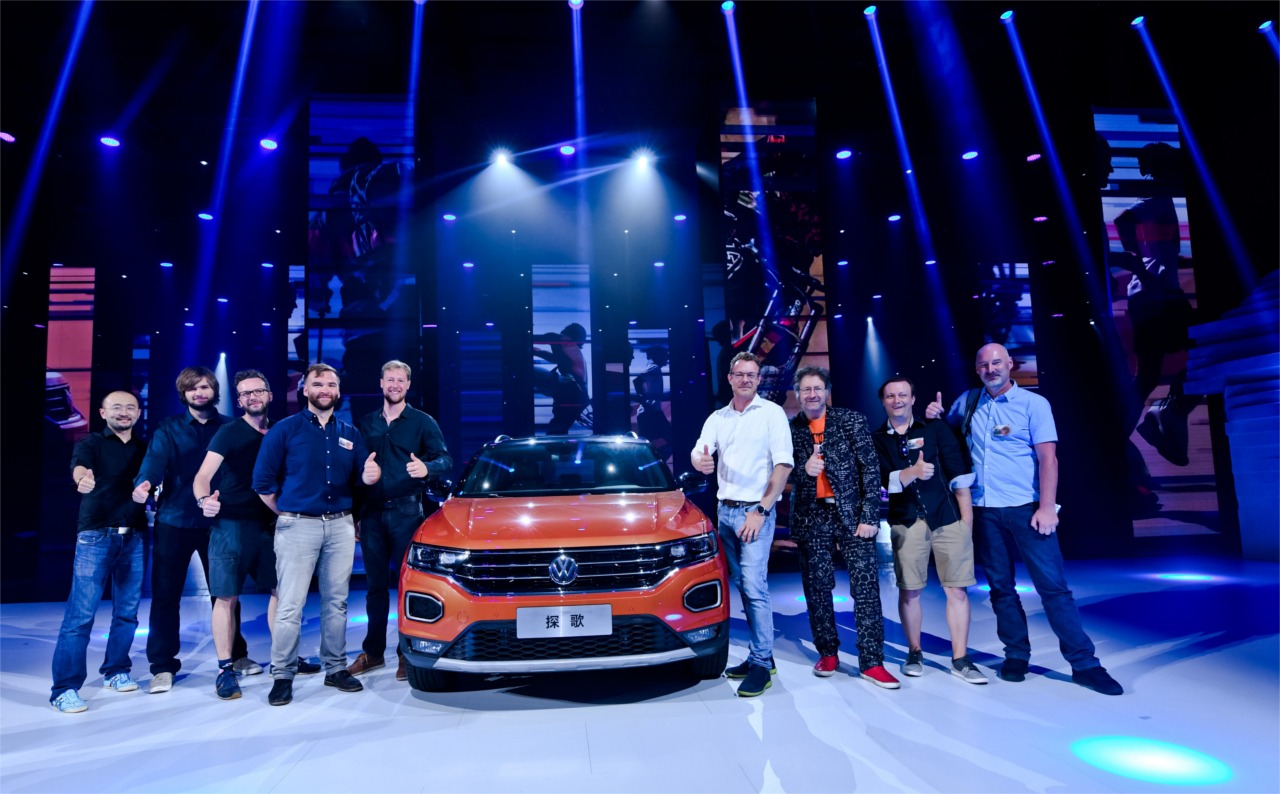 Ventuz Counts Down to the New Year
Scroll to top