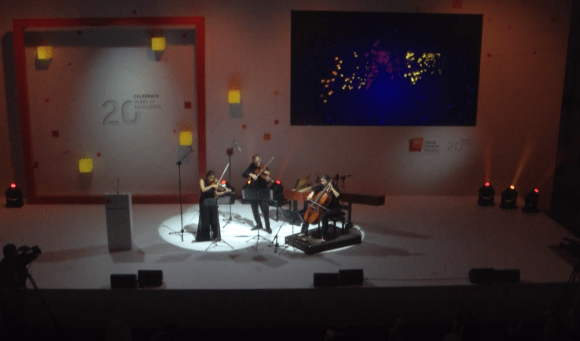 For the 20th anniversary of the Hasso-Plattner-Institut für Digital Engineering gGmbH, Burmester event- and media technology GmbH created an interactive visualisation for the Potsdam Chamber Orchestra with Ventuz. As part of a multi-hour event, a special moment of a few minutes was created in which the musicians came into focus through visual support.

The development process took place in close cooperation with the customer and was completed on the day of the event via a Ventuz touch interface. Last adjustments could be realized in real time on the LED wall in the presence of the customer.

For the end customer, the Hasso-Plattner-Institut für Digital Engineering gGmbH, the insglück company for brand staging mbH has developed the overall concept. The technical implementation was entrusted to Gahrens & Battermann GmbH & Co. KG, who in turn brought in specialists from Burmester event- and media technology GmbH for interactive audio tracking. With only a few days before the start of the event, the customer’s request for an interactive installation was realised.

Through the advice of the Burmester Event and Media Technology GmbH, a pure video playback system could be replaced with Ventuz, this creating a REAL interaction.