After German TV megastar Stefan Raab ended his career last year with the final episode of his successful game show Schlag den Raab, the first episode of the spin-off Schlag den Star was aired on April 9th with respectable ratings – and completely new Ventuz powered game mechanics and graphics system. Media technology provider Cliparts.DE, who has been supporting the format and its predecessor since the very beginning in 2006, has remodeled the entire system and upgraded the graphics to full HD.

The show features two contestants competing against each other in 15 very different games, ranging from sports and racing games to question-and-answer as well as buzzer games. The implementation of Ventuz not only made it possible to shift the entire production to HD, but also allows for slimmer backend setup and additional functionalities, such as overlay video on the host and contestant screens. Ventuz thereby operates all graphic needs of the show, including in-studio LED walls, touchscreens, and on-air graphics.

As each episode of Schlag den Star introduces new games, Cliparts.DE feels that Ventuz is the perfect candidate to meet every demand the show producers can possibly present to them. The first episode already ranked at a rating of 18.5% in the relevant target group and thereby surpassed the producers’ and network’s expectations. 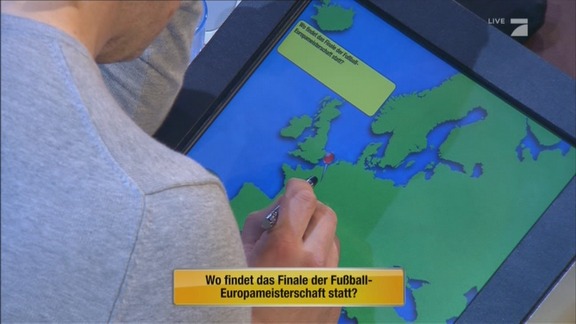