A few years ago I came home from a walk in Kinderdijk with beautiful photos of the iconic windmills and waterways and with a completely new question: how many words does the Dutch language have for ‘water’? My first list had eighteen words, but when I  hit the ‘net I quickly found more. A few hours later, number had gone up to one hundred and sixty-eight…all words for still or moving water on or below the Earth’s surface.

My question wouldn’t let go of me. Perhaps, I thought, it might be helpful to split it into “man-made” and “nature-made” and see which category has the most words. That could say something about the effort the Dutch have put into keeping our feet dry over the centuries. After dividing and counting, I came to the following score: eighty-three words for ‘man-made’, seventy-nine for ‘nature made’ and six in the residual category ‘can be both’. At that point, “man-made” won by a narrow margin. And I saw that the space between the two columns had started to form a kind of river.

A river that just kept growing. It now consists of more than a thousand words. I never imagined that in the beginning…

The river set in motion

Then I found that it was time to set the river in motion. I programmed a stream of words to flow from top to bottom on a computer screen – using Ventuz, a versatile graphics software package from Germany. Words on the left for “natural” water, on the right for “man-made”. Visually tight, with poetry in the form of sounds I found along the river: birds, murmuring water, a train crossing a bridge, church bells ringing in the distance.

The work became an ode to watermanagement – to the long effort of the Dutch to live with, on, and perhaps despite the water. I named it after the river where I live, the Waal. So it became ‘A Waal of Words’.

A premiere at the Rivierenland Water Board

‘Waal of Words’ had its premiere at Water Board ‘Rivierenland’ in July 2021. Employees of Rivierenland are allowed to go back to the office for the first time since the Covid outbreak. The work is a gift to them,  to celebrate this moment. 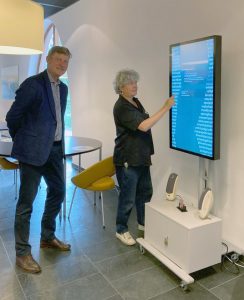 Tools are nothing – AR Showreel
Scroll to top