First introduced in 1997, the SPIEF (St. Petersburg International Economic Forum) is a business event for the economic sector held annually in St Petersburg (Russia), with more than 10,000 attendants from over 120 different countries. It is one of the main trade shows for Russian online bank Tinkoff, and they have contracted Russian agency Inty to take their vision of the future of banking to life for the second straight year.

A long term Ventuz customer, Inty is one of the agencies that have produced some of the finest content created with Ventuz for the corporate and experiential design market, and this project was no exception. For the 2019 edition Inty was not only responsible for the audiovisual installations, but for the whole booth concept and design. 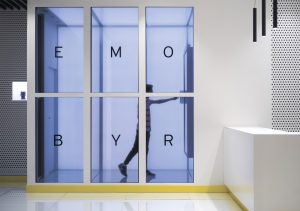 The design was so successful that Inty have received one of the prestigious German Design Award 2021 for the SPIEF 2019 Tinkoff booth, due to its “Excellent Architecture” in the Fair and Exhibition category.

The booth design included many displays and flashy installations, but two of the most outstanding examples were the “Biometry” and “Dashboard” areas, both featuring state-of-the-art interactive audiovisual installations, the kind of projects where Ventuz excels.

The Biometry area presented the interaction of human beings with technology in a small room with its floor and most of the walls totally covered with displays. The entrance and right-side walls were made of transparent 65” TFT panels in a 4×2 layout with a total resolution of 4320×3840 pixels.

The front wall featured an UHD display over an LED video wall and the floor was covered with LED tiles to create another videowall. This part of the Biometry area also featured a Kinect 2.0 sensor to capture the motion of the person in the room and generate graphics based on their position and movements. This front wall and floor setup was controlled by Ventuz in combination with a custom-made Unity shader that received the Kinect data and passed the information to Ventuz via Spout. This provided image and OSC data to the system, Ventuz software was then used to generate the final real-time graphics, handling interactivity and outputting to both the front LED videowall and the UHD display. 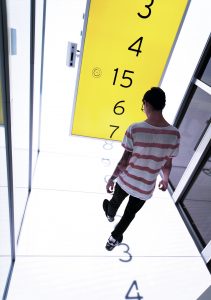 Limitless creativity and disruptive workflows thanks to Ventuz openness and flexibility

“Openness and flexibility are crucial for us and the main reasons why we chose Ventuz software solutions for our projects” stated Andrey Stepanov, Inty CEO, “The complexity of the Biometry area shows this versatility and the power of Ventuz software, being able to control a megapixel installation like this one, together with interactivity and external data transfer, only using two workstations is quite remarkable”, continued Stepanov.

The second Ventuz installation on the Tinkoff booth was the Dashboard area, used to display different types of content, from promotional graphic content to a Tinkoff plenary session taking place in the booth. This included a large video wall with a total resolution of 3840×1080 pixels and divided in three sections.

The Dashboard videowall included three main areas, a center screen with a 2376×1080 pixels resolution and two side screens of 648×1080 pixels each, all the content displayed on them was rendered using a single Ventuz machine that included a video capture board to feed a live video signal of the meetings in the stand that was integrated into the real-time graphics.

An additional Ventuz system was used as graphics control panel, controlling the machine rendering the videowalls content via OSC. With this controller, booth staff could select the content to be displayed on the Dashboard and even add and edit some of the information being displayed on it.

“We have been using Ventuz for quite some time now, so it is our weapon of choice for any project that requires real-time graphics displaying data and interaction of some sort. In addition, the set of tools for high resolution, multi-display layouts included in Ventuz is very powerful and we use it on most of our projects due to its robustness and reliability” said Savva Mihaescu, Realtime CG Artist at Inty.

You can check more amazing projects made by Inty on their website and their Vimeo channel.